Control is an illusion

I love inspiring quotes and the one below by Adi Da Samray is one of my favorites. ´Relax, nothing is under control´.  It inspired me to write this piece. Because the desire to have and maintain control is an issue for a large number of people, myself included. Modern society and our increasingly complex lives have only further increased this, in my view. It’s become more and more complicated to keep all the balls in the air. Meanwhile we’ve collectively become addicted to control. But the ‘funny’ thing is: control doesn’t even exist! It’s a deeply ingrained and widespread illusion. Still, most people persistently believe in it. 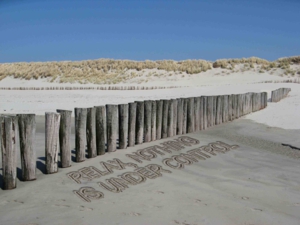 How do you try to exert control?

The tendency to want to exert control expresses itself in myriad ways. Do you worry a lot? Do you prefer things to be done your way? Is it hard for you to delegate? Do you ever try to force things? Are you often pushing and pulling to make stuff happen? Are you the type of person who likes to plan every little detail? Or perhaps you’re always trying to keep things in check, including your own emotions? These are just a few examples. Sadly, our desire for control isn’t limited to our own lives, we even try to control other people. And this isn’t just the case for the so-called ‘controlfreaks’ among us, that’s only a degree difference.

Go with the flow

Although control can seem very real, it’s essentially an illusion. Life moves through us and in that sense we are being lived.  We can either move in harmony with life (‘go with the flow’), or get in the way and offer resistance. By blocking the flow of life we effectively become our own biggest obstacle. Whereas the universe, the source energy or however you want to name it, is innumerable times more powerful than you! Opposing it is pointless and will also cost a ton of energy.

So what exactly is behind our persistent control tendencies? Why do we let ourselves be (mis)guided by it, often subconsciously? An important reason is that control provides us with feelings of security. Mind you: these are just feelings and not reality, since security can never be absolutely guaranteed. Living with insecurity on the other hand, the great unknown, triggers an influx of fearful thoughts and feelings in many people. And that is something we very much like to avoid.
Behind the need for control is almost always fear. Whether it’s fear of change, of not being good enough, of failing, of being rejected by other people, of death, or something else. Life experiences also play an important role in developing an unhealthy need for control. If you’ve ever felt overwhelmed by certain people or events, all emotions included, chances are control will have become a protection mechanism for you. So that next time you’d be able to feel ‘in control’ instead of submerged. Exerting control helps us, or so we think, to get a grip on ourselves and our lives.

What control-seeking tendencies can lead to

Control is not a bad or negative thing in itself, by the way. But it becomes unhealthy when your own need for control doesn’t serve you (anymore). When it hinders you on your path. When it makes you tense or anxious. When it causes you to spend too much time ’in your head’. It can even lead to physical issues. Keeping your control mechanisms going costs a ton of energy.
Control also means something is contracted. And if you keep holding on to it too much, life will start challenging you to loosen up or let go, whether sooner or later. This happened to me while I was travelling in Morocco. I ended up in a hospital, seriously ill and in need of an emergency operation. There was nothing else to do but to surrender to the process. The inherent lesson was immediately clear to me, although I wasn’t all that pleased with the way I had to learn it …

This brings me to the antidote for control: trust, letting go, surrender. Sounds wonderful of course, but to actually bring this into practice is no easy task! I’ve once been told that letting go is just a decision, but I don’t think it usually is that simple. This is because our patterns are strongly anchored within, on multiple layers. Luckily though, letting go is something you can learn to do, in different ways. In my practice I use a special release technique, which is very easy to learn and apply. When you learn to let go and release control a little more, true relaxation becomes possible. And that is your natural state! This way things can start to come into existence in a more natural, effortless way.

During more stressful times my own control tendencies may pop up a little more often as well. That’s when I love to take in the above quote once again, which puts everything straight back into (the right) perspective. A broader perspective than believing in and holding onto control. And that brings about peace …